For those who couldn’t make my Blog Holiday Open House earlier this month, here’s a little taste of what you missed.

This year’s theme was “Christmas in Paris” – I thought having a theme would help focus the menu and provide décor inspiration. Some of my menu items were legit French (i.e., gougères, or cheese puffs), but most were French-inspired/French-ish. I had fun creating a French Christmas theme board on Pinterest – a great way to organize ideas for a party. 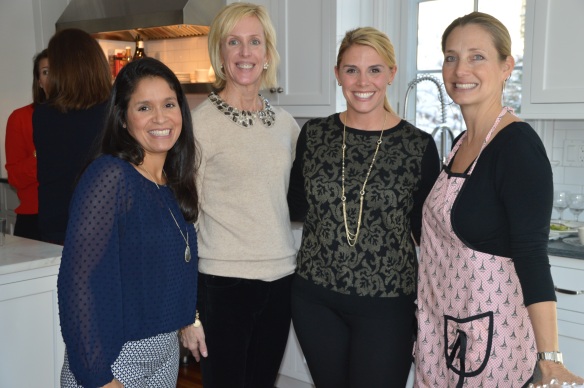 Oui -those are little Eiffel Towers on my apron.

Before I post the menu from the open house, I have to admit that I broke a few of my entertaining rules: I didn’t simplify the menu enough, I stayed up too late the night before, and I tried out new recipes for the event. Some new recipes, like the brie and apricot tartlets, turned out well; the French macarons I thought I’d just whip up were a disaster and had to get dumped.

Failed vanilla bean macarons. I tried to save time with carton egg whites, and didn’t beat them long enough. These still tasted OK, but would never  pass for the chic and iconic French sandwich cookies.

Proving that things always work out in the end, I swapped in mini gingerbread cupcakes (made from  a Trader Joe’s mix) with piped cream cheese frosting (homemade) for the macarons and they turned out to be a big hit. I called them petits pains épicés. (Like I said – French-ish.) 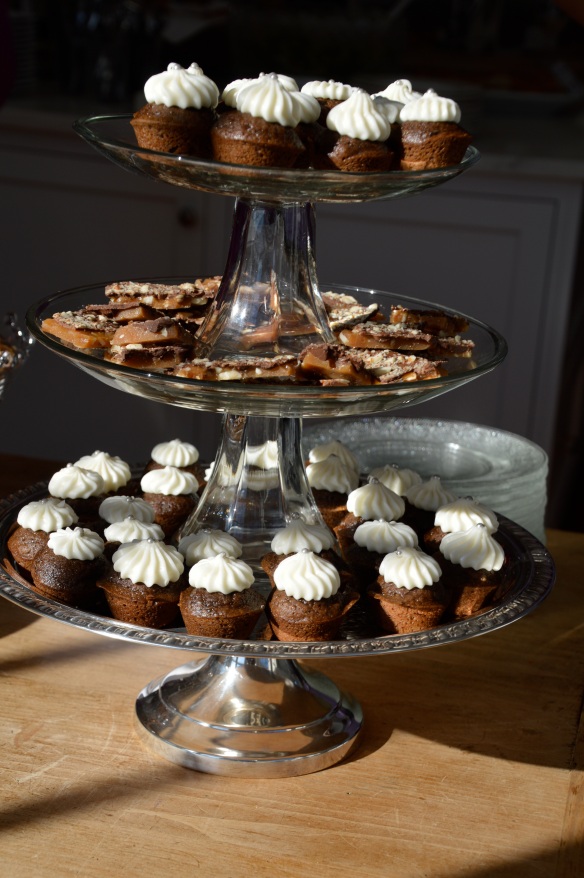 Hosting a midday lunch/open house is a fun way to entertain during the holidays, when weekend evenings are at a premium. People can pop in during lunch hour, and daytime events are (usually) gentler on the liquor bill. Once again, I tried to stick with finger foods – though the salad and chocolate tart required forks. (Have you seen the plastic cutlery that looks like silver? Love it for events like this.)

The brie and apricot tartlets took about 5 minutes to prepare and less than 10 minutes to cook. They went so quickly that I didn’t have a chance to photograph them. Here’s a recipe that’s close. Just swap apricot preserves for the fig jam and toasted sliced almonds for the prosciutto. (Though that combo sounds pretty good too!)

The andouille sausage wrapped in puff pastry was another no-stress nibble. I baked them ahead of time and just had to rewarm them a few minutes as guests began arriving. Look for some precooked andouille sausage (which can be a little spicy). Cut a sheet of frozen puff pastry into 4 quarters. Brush one edge of each quarter with a little beaten egg (for glue). Place a sausage on the other end of a puff pastry piece and roll towards the egg edge to seal. Place wrapped sausage logs in the freezer for 10 minutes, then slice into 1/2-inch coins. Arrange coins on parchment-lined baking sheets and bake at 375F for about 20 minutes. (I got this idea from Food & Wine magazine, but simplified the recipe.) To tame the spice from the sausage, I served these with a dip made from dijon mustard and orange marmalade (about 1:1 ratio).

I found the chicory, chestnut and pear salad recipe on epicurious.com while I was looking for ideas for chestnuts. Christmas in Paris and Chestnuts go hand in hand – though more often you’ll find them roasting on a street kettle or glazed in sugar (marrons glacés). Roasted and peeled French chestnuts are très expensive here, but I found this value pack of Chinese chestnuts at Costco for less than $5. At least one person at my open house admitted that she didn’t care for the mealy-ish texture of the chestnuts (even though I had pan-toasted them for the salad); if you’re not a chestnut fan, you could substitute toasted walnuts or pecans for this recipe. (Which then would look a lot like my Harvest Salad . . .) 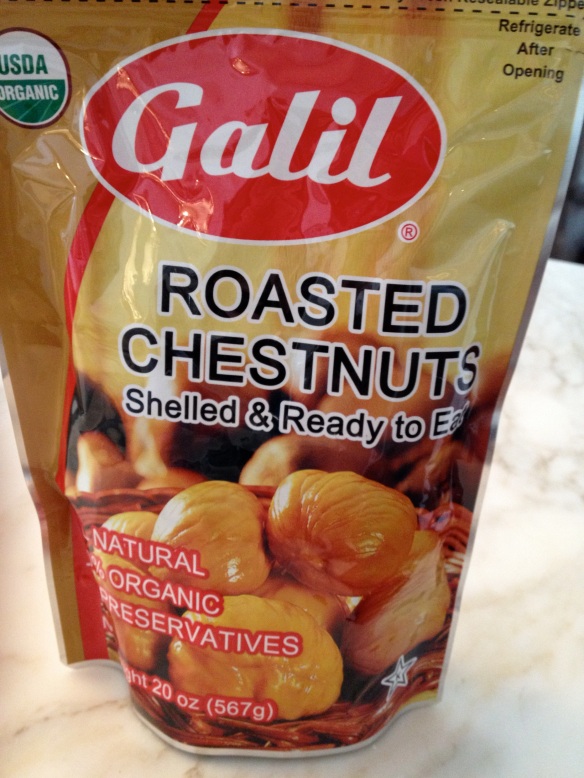 Costco pack of ready to eat chestnuts, which I used for a salad.

For my open house salad (served in a large punch bowl), I used 2 large heads of chicory/curly endive, 2 red bartlett pears (which weren’t quite ripe enough), a 20-oz bag of chestnuts, and 1/2 cup crumbled Maytag blue cheese. Chicory is a sturdy green, which held up to the dressing for 2 hours (until the salad disappeared). I made a triple batch of this recipe’s dressing, adding 1/4 teaspoon kosher salt and about a teaspoon of agave nectar to sweeten it a little. (I didn’t need to use all the dressing.) 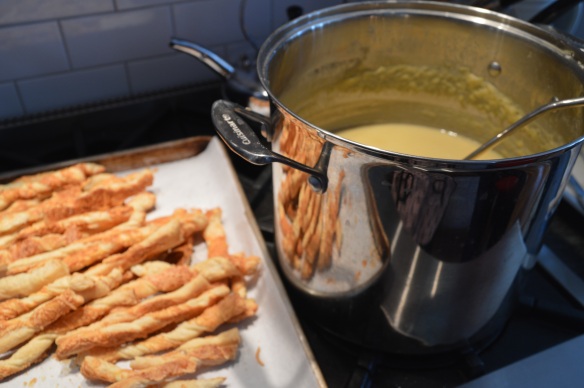 The Wild Mushroom Fondue makes its triumphant return to the menu. Its creaminess comes from reduced-fat cream cheese (neufchatel cheese), parmesan and a tiny bit of cream.

Gougeres, or cheese puffs made with gruyere and parmesan, are best eaten right from the oven or warming drawer. I passed these around so guests could try them hot (and I could sample as I went along).

Gougeres freeze and reheat well, so they can be made in advance. 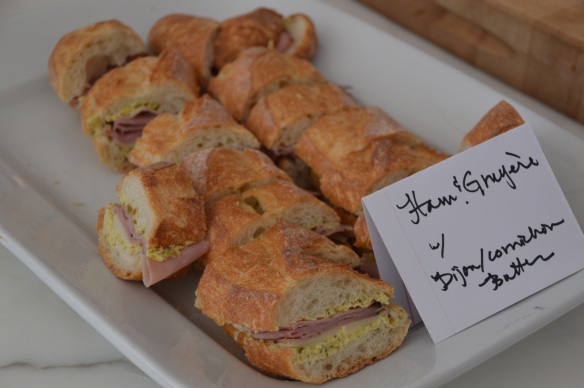 These little sandwiches were a last-minute add-on, but they disappeared. To make dijon/cornichon butter, add equal parts dijon mustard, softened butter and cornichons or dill gherkins or  to a food processor and pulse to form a paste. Spread onto fresh baguette and top with thinly sliced ham and gruyère cheese.) 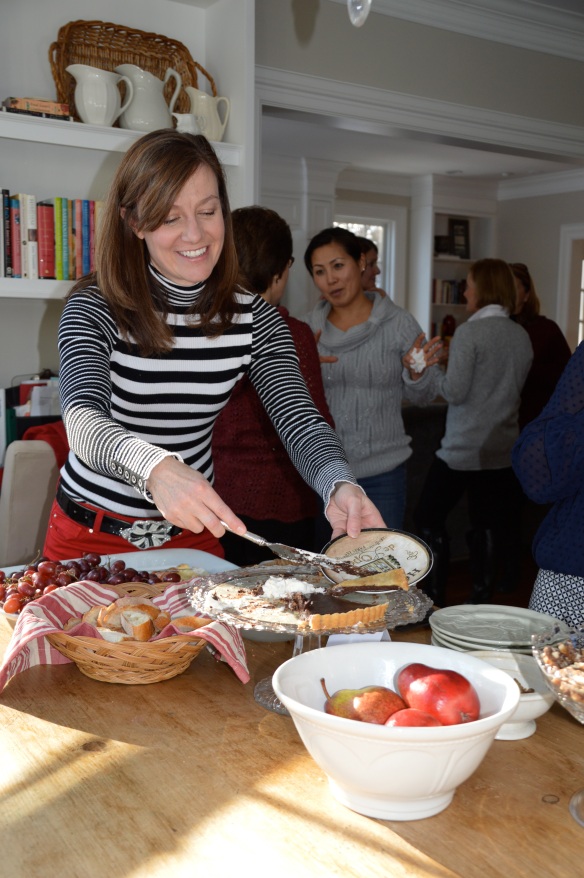 Suzie going in for one of the last slices of warm chocolate tart. Cut into thin slices to feed a crowd – it’s very rich. (But very good!) 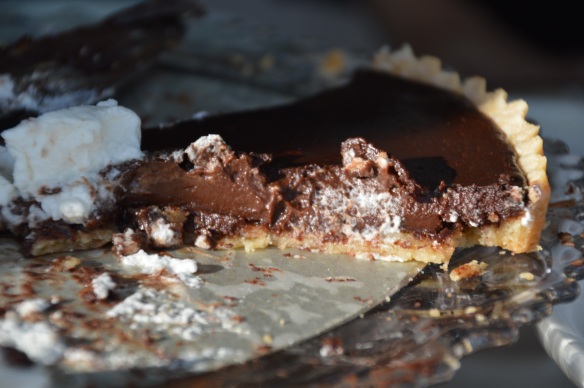 The festive Red Pants Ladies at the drinks station (dining room). Wine chiller is a vintage punch bowl. Table cloth is not expensive French linen but rather a Home Depot drop cloth! 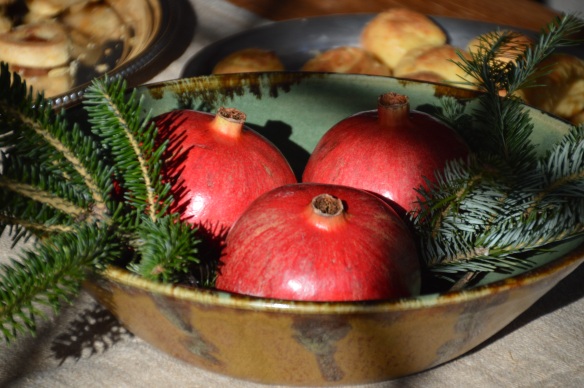 A last-minute centerpiece: pomegranates and Christmas tree trimmings in a bowl.

Thanks for all the “Kitchen” support, ladies!

This year I thought I’d hand out favors to my guests as they left. (It’s what Martha would do, isn’t it??) In a perfect world with unlimited time, I would’ve baked and packaged homemade treats. But – I had to cut back somewhere. So I put a few dark chocolate pomegranate bites into little cello bags, then closed them up with clothes pins ($0.97 for 50 at WalMart) and some cedar sprigs. Festive, but not really French!