As we mark Day 8 without electricity thanks to Frankenstorm Sandy, tempers are getting shorter, temperatures are getting colder, and gas lines are still long (though improving).  We feel isolated from the world, and abashed by our envy of neighbors who have regained power. We find ourselves idling around, mourning cable TV and internet, and complaining about a cold house. But then we snap out of it. Unlike many in the area, we still have a house. We have gas for cooking, and a generator for little luxuries like toast. We have our family intact, and have never had this much quality time together: fireside Scrabble tournaments and roasting marshmallows in the living room; reading books and doing crafts; making pancakes on a weekday. I’d say we’ve been pretty lucky. 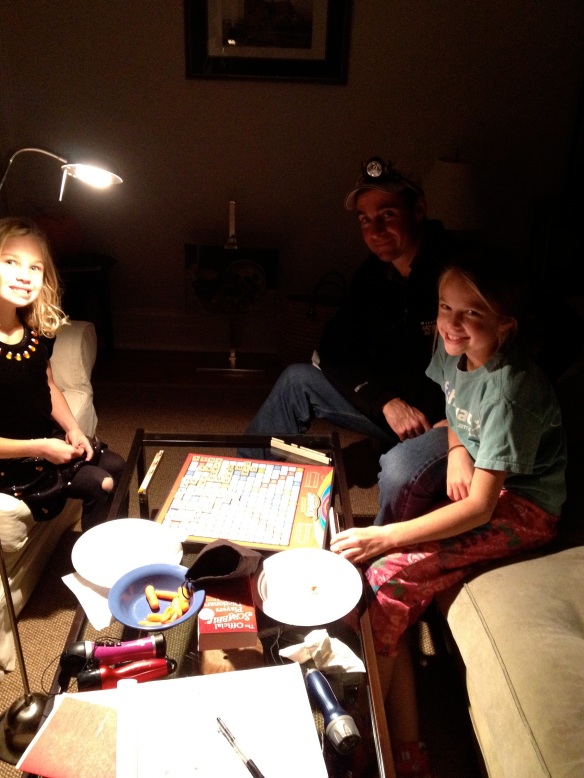 And those neighbors with power restored? We can’t begrudge them. We’ve been humbled by their graciousness and generosity – open doors for heat, phone charging, meals and even laundry service! We’re also in awe of those with no electricity but who refuse to be powerless; several neighbors have been working tirelessly to collect clothing and blankets for communities that were truly devastated – not just inconvenienced – by the storm.

With or without electricity, we still need to eat – and a home-cooked meal can go a long way towards restoring a sense of normalcy. I’ve been enjoying the mental challenge of figuring out what to cook next, based on what needed to get used up and what could be prepared over the gas stove or in the toaster oven. Here are some of the things I’ve been cooking – in case you’re also without power and in need of some inspiration:

Tonight I’m going to make a big pot of Tomato Fennel soup. All neighbors – with or without power – are welcome to stop by for a mug.

We’ll get through this!

PS – On the way to Starbucks to post this, I passed 3 utility trucks working in our neighborhood. Someone heard we might have power as soon as tonight. I’m surprised to feel a twinge of sadness mixed with euphoria and relief; I was hoping for more Scrabble games by the fire. It’s a tradition I hope we’ll continue, even when the cable’s back.

1 thought on “Sandy Aftermath: Trials, Triumphs and What We Ate”